Flickr is a photo sharing site that has been around since 2004. I've been using it every day since a month after it launched, and love it dearly. It has gone through a lot of changes, getting bought by Yahoo!, stagnating for years, then getting handed off to Verizon when Yahoo! died. A lot of people were worried it would just shut down. Well we don't have to worry now because SmugMug, another photo sharing site, has bought Flickr and says they will keep it open.

I was surprised to learn that SmugMug is actually two years older than Flickr. It was created and is run by Chris and Don MacAskill from offices in Mountain View CA. Flickr is currently based in San Francisco, sharing a floor with other Yahoo! people. Word is that SmugMug will keep Flickr separate, retain all employees, and find them new space in SF. Sounds like a good deal.

Anyway. Flickr getting reprieved from imminent doom has got me thinking about all the ideas I've had for improving Flickr. I've been saving them up for years. While Flickr was treading water there didn't seem much point in brainstorming improvements, but all of a sudden things look different. So, here in no particular order is my Flickr to-do list.

When a photo sharing site dies, there's usually some attempt to migrate the users to another site. SmugMug has done this at least once before, with a site called Picturelife. I don't know the details. Now that they actually own another photo site, migration will be an ongoing issue, not a one-time thing. Some Flickr users will want to go to SmugMug, some SmugMug users will want to go to Flickr. I think this means it's time to spend some resources on the migration process.

What if there was a standard for transferring both photos and their associated metadata between sites? The metadata would have to be lowest common denominator, but there's a lot of commonality between sites. Title, description, comments, tags, dates, location, views, favorites, license, albums. Groups would be a problem so probably skip those; but I have an idea on that below.

This is the kind of thing that no one wants to spend the effort on themselves, but everyone would like to have when they need it. SmugMug / Flickr being two sites under one roof is incentive to finally do a real job on this. And it's more valuable the more sites support it, so it should be an open standard with open source sample implementations.

As with the Yahoo! login system, getting rid of Yahoo! Maps is probably required since Yahoo! is being broken up for parts. But it would be a good idea anyway since Yahoo! Maps have always been terrible. Two good candidates are Google Maps and Open Street Map. I've worked with both APIs and they are pretty easy to use.

There are a bunch of other things about Flickr's map system that ought to be fixed too, but just using better map graphics is the big one. 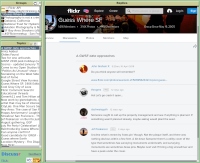 Flickr's group discussions use a classic three-level structure, group / topic / reply. This structure goes back literally decades, to Picospan in 1983 and even Plato Notesfiles in 1973. It facilitates conversation without overwhelming people. It's a keeper. However, Flickr's current UI for the discussions is, well, meh. This is too bad. For many people, group discussions are the heart of Flickr. For them it's not so much a photo sharing site as a social network where most of the users happen to be photographers. They deserve a discussion system that is excellent, not meh.

Back in 2009 I wrote a prototype alternative UI for group discussions. Same back-end, just a different front-end for navigating the groups and topics. It's called Discussr. It's an improvement over the standard UI in a couple ways: faster to use, easier to use, and even a bit more functional. I still use it pretty much every day. You can read more about it here.

When Flickr started back in 2004 it was quite complicated compared to other web sites of the time. However it also had a huge advantage: consistency. Every page had the same header and the same footer. Once you had figured out the options on one page, you had figured them out on every page.

During the Yahoo! years, Flickr had a penchant for doing cosmetic redesigns - the empty calories of web development. Unfortunately they never carried the facelifts through to apply them to every page. Each redesign did only some pages and then petered out. And each of them did a different subset of pages. The result is that Flickr now has half a dozen different page designs, superficially similar but differing in the details.

So my suggestion for this is: pick one style, and apply it to every page. Make Flickr consistent again. 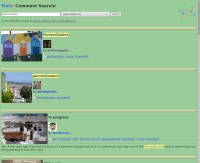 Flickr's search function does not look at comments on photos. It really should.

I first ran into the issue playing the photo guessing game Guess Where SF. People kept posting things that had been posted before. Even if they did a search first to check, that didn't necessarily help because the answers get posted in the comments and search does not look at comments.

After a while I got frustrated enough that I implemented my own search page for Flickr, called Searchr. It's nice and simple and it does look at comments, as well as title / description / tags like the standard search. It has been extremely helpful in the Guess Where SF game, and I also use it for searching my own photos all the time. However it is fairly expensive to run (CPU time, network bandwith, storage), so I only index a few groups and users. If Flickr ever implements comment searching themselves I will happily retire Searchr.

All image sequences throughout Flickr are shown with the newest image first and oldest image last, with one exception: albums. Albums get new images added at the end, instead of the beginning. If you don't like this inconsistency, you can re-sort your Albums every time you add to them, but that gets tedious. I actually implemented a fix for this, that does the re-sort automatically every night.

My little fix works ok, but wouldn't it be better if Flickr handled this itself? It's probably too late to change how Albums work, but what if we let users set the order they want? The default setting would be the current (wrong) newest-last order, and anyone who cares could change the setting to the (correct) newest-first order.

Geotagging means setting the location of an image. Back when it was invented, geotags were actual textual tags, just like any other tags except in a special format called machine tags. They looked like this:

This format is not particularly pretty but it has an important feature: it's portable. Tags are just text, and they can be easily read and manipulated and transferred between systems.

However, after a couple years of using the standard geotags, Flickr decided to switch to a custom API-based system. There may have been good reasons for this. Perhaps it gave better performance. But one thing it was definitely not was: portable.

Perhaps this form of automatic tag conversion would be useful for other kinds of machine tags too, although I can't think of any examples at the moment.

This bug has been around since the "justified" style of photo view was launched back in 2012. It's easy to demonstrate. Go to your contacts photo page, https://www.flickr.com/photos/friends. Click on a photo but in a way that leaves you still on the page, for instance use a favorite star, or do a middle-click to open a photo in a new tab. Now scroll down. Scroll, scroll, scroll, until you see the "Fetching more photos..." notice. Wait. When the fetch completes, Flickr jumps the page back up to where you clicked.

There's an easy workaround: after clicking on a photo, always remember to also click on the whitespace between photos. This is annoying but it makes the site usable so I do it. It also provides a huge clue about the bug. Clicking on the whitespace clears the focus. Maybe the bug is that it's repositioning the page to the element with focus? If so, the fix should be trivial.

Every time I've brought up this bug, and the workaround, and the fix, the response has always been that it will be fixed in the next version of the contacts page. That is pretty typical of modern web development - rather than fix an existing thing, rewrite it and hope the bug doesn't appear in the new version. Well, it has been long enouugh and the fix should be easy. Just do it.

This is somewhat blue sky, but what if group photos and discussions could optionally be shared between different services? Like Mastodon is a federated multi-site version of Twitter, we could do the same for photo groups. Again because Flickr and SmugMug are under one roof, there's an incentive to do this for ourselves; and then making it available to other services as well would only increase the value.

A longer-term project which could end up having a huge impact.

Back to ACME Updates.